The Bible tells the stories the crop circles point to those stories. Why crop circles? It’s Final Harvest time by 2020; we will all be seeing a whole lot clearer; that’s our Father’s sense of humor. The last “Trump” is about to sound. If you have any loved ones, you would like to bring to the LORD this site can help. G-d proves HE IS and HIS WORD is reliable, and HE keeps HIS Promises.

Psalms 100:3-5
(3) Know ye that the LORD he is G-d: it is he that hath made us, and not we ourselves; we are his people, and the sheep of his pasture. (4) Enter into his gates with thanksgiving, and into his courts with praise: be thankful unto him, and bless his name.
(5) For the LORD is good; his mercy is everlasting; and his truth endureth to all generations. 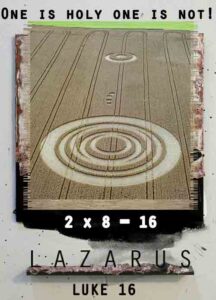 This is the last generation the youngest in creation. We are all the children of our great, great ancestors some in glory, some in torment because they rejected G-d, HE did not reject them. When building a utopian society, you want to be with those who want to be with you. The ones in torment are hoping like the story of “Lazarus and the Rich Man” (Luke 16:19-31), that his family does not end up where he went.
In the image of Lazarus on the left, we find two thrones one is Holy one is not. Three angels are en route to send one soul (four total) into the abyss of hell. The abyss has four lines. 2 x 8 = 16 For Luke 16:19-31 once one spirit is removed, we then have 2 x 7 for Psalm 14:1-7 and why he might have been tossed in.

Father thought it would be nice to put pictures with HIS word for those who are spiritually immature, knowing there will be a lot of newborns coming and be given corrupted scriptures. I would like to do this in one accord. Instead of waiting for the promise of the HOLY SPIRIT, we are now waiting for the return of Christ. I have been given the honor of telling you HE IS ON HIS WAY.

To say we do not have to agree on everything to be friends in Christ is to neglect Amos 3:3.

Look at this wonderful bowl of soup (new translations), and the cook only drooled in it a little…Yum.
Want to know what the devil is hiding from you? He must have a good reason, or he wouldn’t hide it. It could mean the difference of a loved one or two in his home for eternity. Take a KJV and compare, whatever he hid. We need to expose it, to help the cause of reconciliation.

Many of the Psalms of David are referenced by the crop images. Why? (Acts 13:22)

Part Two: The start of the war the beginning of the new world order BECAUSE OF THIS THE WHOLE EARTH SHALL MOURN

The Priesthoods of The Devil making slaves of the world’s population.

Part Six:   The Four points of the cross and how the Constellations fit in.

Part Seven:  Rome and Dressing the Enemy of Man.

Food for thought if the Vatican and the Pope have communications with G-d why haven’t they come up with the answers? Maybe because they truly do not know HIM. Wouldn’t that be a shame for the billions who follow them?

Permanent link to this article: https://gr44governing.org/timeline/